The poetry of subatomic particles 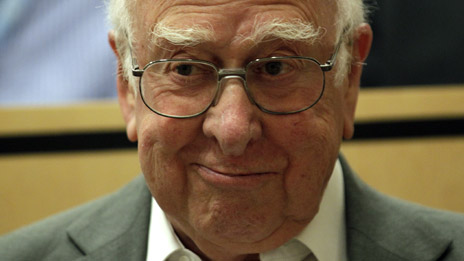 Peter Higgs at a Cern seminar in 2012

The Higgs boson, which scientists at Cern appear to be homing in on after 45 years, gets its name, as everyone knows, from British physicist Peter Higgs, one of the first to propose its existence.

But what about the other part of this great name - boson? This, in fact, is also named after a physicist, Einstein's Indian contemporary, Satyendra Nath Bose.

Physicists from Russia to California have given lots of curious and sometimes poetic names to the subatomic particles discovered over the last century or so. Here are 10 of them.

The Higgs boson, proposed by Peter Higgs in 1964, is if it exists what gives matter mass. It has also been named the name God particle by American physicist Leon Lederman. "He wanted to refer to it as that 'goddamn particle' and his editor wouldn't let him," Higgs told the Guardian. So "God particle" it was.

A fundamental particle that combines to form a range of other particles, including protons and neutrons, the particles that make up the atomic nucleus.

The term was drawn from James Joyce's Finnegans Wake by American physicist Murray Gell-Mann (born 1929) in 1962. He had already come up with the sound, and was thinking of spelling it "kwork".

"Then, in one of my occasional perusals of Finnegans Wake, by James Joyce, I came across the word 'quark' in the phrase 'Three quarks for Muster Mark'," he explained in his book, the Quark and the Jaguar.

A particle made of quarks. The name was proposed by the Russian theoretical physicist Lev Okun (born 1929) in 1962. He wrote: "In this report I shall call strongly interacting particles 'hadrons'… the Greek hadros signifies "large", "massive", in contrast to leptos which means "small", "light". I hope that this terminology will prove to be convenient." It is in Cern's Large Hadron Collider, a machine in which hadrons are accelerated to high speeds and smashed together, that footprints of the Higgs boson have been spotted.

A class of particles often associated with forces (as the carriers of the force). They obey Bose-Einstein statistics, named after the Indian physicist, Satyendra Nath Bose (1894-1974). The suffix "-on" is Greek, and became standard for newly discovered particles a century ago.

A class of particles which, unlike bosons, obey Fermi-Dirac statistics. They are usually associated with matter rather than force. They are named after the Italian-born physicist Enrico Fermi (1901-1954) a naturalised American regarded as one of the fathers of the atomic bomb, along with Robert Oppenheimer. 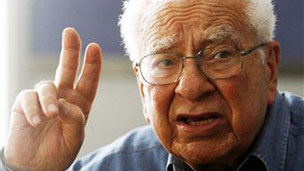 A type of boson responsible for the strong force between quarks. The term derives from the English word "glue". It was first proposed in 1962 by Murray Gell-Mann, who suggested the existence of particles composed of a number of gluons, which he called glueballs. 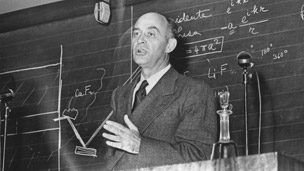 Uncharged particles created as a result of certain types of radioactive decay, with a tiny mass even by the standards of subatomic particles. Neutrino means "small neutral one" in Italian. The particle was first proposed by Wolfgang Pauli (1900-1958) in 1930, who gave it the name "neutron". Enrico Fermi renamed it three years later, because "neutron" (from the Latin for "neutral") had by then begun to be used to refer to the uncharged particle present in the atomic nucleus.

An indivisible quantity of electric charge, proposed in 1894 by the Irish physicist, George Johnston Stoney (1826-1911). Derived from the word "electric" (or the Latin "electrum") plus the Greek suffix "-on".

A particle made of a quark and an anti-quark. The name comes from the Greek "meso" meaning "mid", because mesons, when first observed, appeared to have a mass somewhere between that of an electron, and nucleons (the particles - protons and neutrons - making up the atomic nucleus).

One of a large number of particles named after letters of the Greek alphabet, in this case "mu". It was originally thought to be a type of meson (the mu meson, as distinct, say, from the pi meson), but was later renamed. Mesons came to be understood as particles made up of quarks, while muons are elementary particles. The scientists at Cern have cornered the Higgs boson (probably) using a detector known as the Compact Muon Solenoid (CMS), which measures the energy and momentum of muons, photons, electrons and other particles generated by the colliding hadrons in the LHC.