This is one of the most puzzling and contested events of the whole war – even more so than the debate over the actual causes of the uprising. We only have Burnham's first-hand account together with a great deal of secondary supposition, hearsay and disbelief. Historians have debated what happened and Burnham's motives for the story for decades. This section aims to answer as best as possible the questions: Who did Burnham kill? Why lie about it? What was the significance? We'll start with Burnham's account and then dissect it. 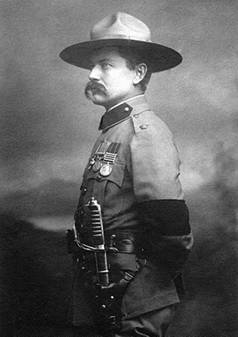 Burnham in 1901. The black armband is a sign of mourning for the recent death of Queen Victoria.

The primary source for this event remains Burnham's Scouting on Two Continents, published in 1927 and consisting of dictated and edited notes about his life and adventures. His account of the killing of Mlimo takes up a full 10-page chapter in the book (Burnham 1927: 249-258). It reveals much of interest, so we'll give an long summary here:

One day in June, 1896, a young man came through the lines and knocked on the door of the small brick house we had dubbed the “Rat's Nest”... he told me his name was Armstrong and that he was a Native Commissioner stationed at Mangwe... he said that a certain Zulu... had betrayed to him the location of the M'Limo's cave in the Matoppos. The reason for this treachery, he explained, was personal hatred of the M'Limo; for when the Zulu had neglected to pay tribute to the great high priest, the M'Limo in retaliation had bewitched the Zulu's family and killed them all... [Bonar] Armstrong had come to propose to me that we go together, find this cave and kill the M'Limo, and put an end to the source of all our troubles with the natives... Earl Grey gave us an immediate audience and promptly decided that knowledge of the locality of the cave was of military value and required immediate action... [They reported to Carrington who supported the venture]

General Carrington... impressed upon us that we were not ordered on this enterprise, but that it was entirely a volunteer venture on our part... His final words were “Capture the M'Limo if you can. Kill him if you must. Do not let him escape.”

There was small need for that last injunction. Constantly before my enraged vision rose the picture of my wife vainly holding to her breast our dying Nada [their three-year old daughter who died in the laager]

The blackness into which I rode was no darker than the thoughts that ebbed and flowed though my mind during that night, as Armstrong and I silently turned our horses toward the Mangwe Pass. Many gruesome pictures of tragedies to settlers at the hands of the natives rose before me... And now by a strange turn of fate, I was setting out in the hope that I might meet the artist who had inspired all those horrors... Armstrong had secretly arranged a rendezvous for us with his mysterious Zulu informant... we undertook the difficult task of a preliminary scout to locate the M'Limo's cave... not many miles from Mangwe.

[The mountain] was a rough granite pile, perhaps a thousand feet high and three quarters of a mile in length. Over its dome-shaped mass great boulders lay scattered, many of them the size of an ordinary house... At last we found the entrance to the cave, about halfway up the mountain... and from it a zigzag path descended to the base of the mountain where there was a level space of hard-beaten clay used as a ceremonial dancing floor... [and about 100 houses]... The prospect of ever gaining entrance to this cave unobserved appeared hopeless. Over the numerous trails were passing many goat herders and women carrying grain and supplies to the villages that lay farther on. At any moment, we might run into a party of fully armed warriors. [They proceeded by moving slowly and in stages, hiding their horses]... Having ascertained much, we returned to Mangwe and awaited with keen impatience the arrival of our Zulu informant... He duly appeared... and then gave us the promised details of the M'Limo's plans...