Baden-Powell's famous sketch of Armstrong and Burnham's escape from the M'Limo's Cave" after they shot the old man.

This is a classic tale of Victorian adventure and it was taken up with delight by the Press. Burnham was presented with a gold watch by the Administrator and became the hero of the hour (Armstrong was only to receive a watch several months later, almost as an afterthought; he sent it back marked “Refused by Addressee” [Clarke 1983: 45]). The Bulawayo Chronicle of June 27 reported that “If the right one be killed it should go far to damp the spirit of the natives”. Scepticism was the order of the day even in the initial reports, to whit the Chronicle continued: “The report seems to be too good to be true, and we cannot understand how the rebels were so careless about guarding the home of the god. Of course they might reason that being a god, or servant of god, no harm could come to him, but it seems strange that some of them were not near”. Some of the old hands at Mangwe were openly disbelieving of Burnham's claims including the hunter Van Rooyen and “Bulala” Taylor.

In more colourful language, the Marquis de Moral wrote in his diary: “Talk at the club that Armstrong and Burnham's story of the shooting of the M'Limo is 'all balls' as one man graphically describes it. Sergt. Farley of Grey's Scouts met me at the office and says its 'a d....d lie'. That they shot an old [man] who was working or standing in a... garden, and they galloped like hell to Mangwe, when they got away from the rocks, saying they had been chased by the Matabele. I said 'Galloped in the Matopos' Farley said 'Yes!'” (quoted in Emmerson 1975: v).

The exact identity of the man they killed remains a question. Contemporary accounts agree that it was an “old man” but further corroboration is lacking. Hole is emphatic in his belief that Burnham killed an old man working in his fields. Clarke (1983: 45) quotes a letter in which the author agrees with Hole, claiming his name was Gwegula and that he used to walk around with a staff scaring the birds from the lands. Ranger (1967: 187-188) confidently – and perhaps wrongly – identifies the man as indeed being a priest of a shrine but one who had acted in a neutral capacity during the War. Naming him Jobani or Tshobani, Ranger concludes the murdered man was today remembered as Habangana. He is also known as Dshobani (Ransford: 1968: 112). Burnham's claims about the old man require scrutiny. By claiming the man was lighter in colour than his companions, Burnham was shrewdly playing to the prejudices of his audience who often took for granted the inferiority of African religions. Using the word “Nilotic” in his account shows his desire to suggest that the Matabele could never have organised the rising themselves and thus the foreign priestly caste were to blame. 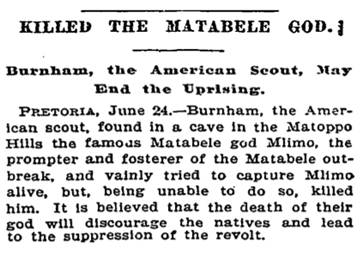 The full story will likely never be known. The report of the judicial enquiry into the whole affair by Justice Watermeyer has yet to be found; perhaps no copies even exist. Ransford (1968: 111) quotes from the Marquis' diary stating that the Justice had confided in him saying “The whole thing was a fake and a lie of self-glorification of young Armstrong and Burnham”. Other than Burnham's writings, what accounts we have are marred by obvious prejudice and remoteness from the events concerned. BSACo stalwart Hugh Marshall Hole denounced the whole thing as a hoax, repeating this claim in his The Making of Rhodesia. Emmerson (1975: vi) concludes the whole affair was close to being a “calculated deception” and even allows for the fact that Rhodes and the BSACo might have stage-managed the whole affair as a “deliberate exercise in psychology to boost the flagging morale of the settlers and to destroy the fighting spirit of the rebels”.